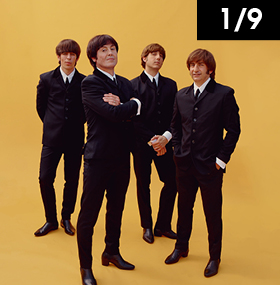 THE BOOTLEG BEATLES, THE GREATEST TRIBUTE TO THE BEATLES OF ALL TIMES

On Wednesday, September 1st, Starlite Catalana Occidente will receive The Bootleg Beatles, the most respected Beatles tribute band in the world.

The world’s Premier Beatles band continues to draw huge acclaim with their flawless recreation of the greatest songbook of all times. Tracing the Fab Four’s journey through the swinging 60s, every tiny detail is forensically observed, from their authentic period costumes and instruments, to their witty stage banter and “inflection perfect” vocals. This show is an absolute must for Beatlemaniacs of all ages.

The Beatles themselves are fans of this English band that has been touring the globe for 30 years, and which has even played for the Queen of England. A gift for those Liverpool band fans who will relive the great classics that made history. A unique performance in which the audience will really believe they are watching the greatest rock legends, The Beatles: John, Paul, Ringo and George.