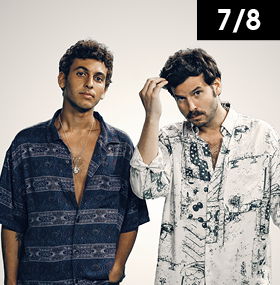 Taburete, the group that revolutionized national pop, will be back on stage at the Starlite Catalana Occidente Auditorium next Sunday, August 7th to give the public one of the most energetic nights of the summer.

Willy Bárcenas, the singer of the group, and Antón Carreño, the guitarist,  created the band in 2014, thanks to their complicity and song-writing chemistry.

Their adventure began with the album “Tres tequilas“, with “Dr. Charas“, they reached national recognition with their biggest single “Sirenas“. With their third studio-album “Madame Ayahuasca” they obtained international recognition and with “La Broma Infinita” they have become unstoppable. Their successful career is full of important highlights such as: five albums, a Latin Grammy nomination and sold-out concerts in Spain and Latin America.

Being one of the most relevant groups of the national scene, Taburete has successfully emerged thanks to the good work of their lyrics, their careful melodies, and their mix of styles, which range from the most ‘Sabinesque’ singer-songwriter song to the rumba, passing through the boldest pop with Mexican essence. Good vibes, sympathy and kindness are the characteristics that describe this group, which makes them capable to conquer all kinds of audiences.

This year´s new and awaited tour “Caminito a Matadero“, the group hopes to go to back to their roots and make the audience enjoy with them on stage. During the tour they will play their best-known songs and will present their highly anticipated album “Matadero 5″; where the group dare to play pop, rock, boleros, rancheras and even flamenco. Their latest singles, “La Discoteca“, which features the stellar participation of Dúo Dinámico, and “Roto y Elegante“, have been accepted with great success by their fans.

Next Sunday, August 7, full of good vibes, energy and good music, the group from Madrid will make the audience vibrate at the Starlite Catalana Occidente Auditorium.