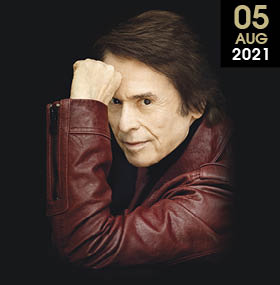 Tickets previously acquired of concerts whose dates have been postponed to 2021 are still valid for the new date. Customers can also change them for any other scheduled show in the Starlite Catalana Occidente line up. Clients will have 15 calendar days from the announcement of this release to make a decision about their tickets, either opting for the refund of the money or for accepting the new date. The refund request has to be submitted through the same platform used to make the purchase. All customers will be contacted by email with more information on how to process their choice.

Raphael will be back at the Auditorium stage of Starlite Catalana Occidente on August 5th, after his visit to the festival in 2012 and 2019.

“The voice”, “The one and only” or “The indie boss” are only some of the names he has been referred to by media and his audience: a living music legend. This time, Raphael will be presenting on the Auditorium  along with his band, in order to delight assistants with some of his most important successes, such as ‘Yo soy aquel’, ‘En Carne Viva’, ‘Mi Gran Noche’ or ‘Los hombres lloran también’, his first number 1.

The presence of Raphael on stage, his charisma, the quality of his voice and his authenticity have made him earn huge recognition in the industry as well as an impressive record career that has led him to sing his records in the most important stages in the world. Raphael has starred a brightening music trajectory that for almost 60 years accumulates 335 Golden Records and 50 Platinum Records.

It will be a luxury to be able to enjoy this emblematic artist and his legendary voice in a unique show on August 5th at Starlite Catalana Occidente.