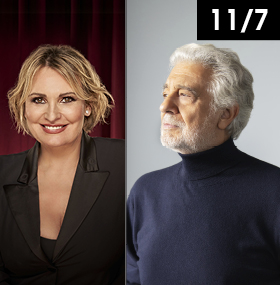 PLÁCIDO DOMINGO, 81 YEARS OF A LIVING LEGEND WITH AINHOA ARTETA, THE SPANISH VOICE THAT HAS CONQUERED THE WORLD

Plácido Domingo returns with the company of Ainhoa Arteta to the stage of Starlite Catalana Occidente on Monday, August 11, 2022, in one of the most anticipated events of the season, where the living legend will meet with one of the most renowned sopranos in the world.

Plácido Domingo, singer and conductor, tenor and baritone, multifaceted artist with more than 150 roles, acclaimed by the public on stages all over the world. Named Renaissance man by the critics, awarded with honorary titles and prestigious prizes, known also for his humanitarian commitment. Promoter of young talents and founder of Operalia. World ambassador of Spanish culture and Zarzuela. Extraordinarily eclectic, he has been artistic and general director, disseminator of opera with Carreras and Pavarotti. Performer of world premieres of operas, pioneer of cross-over and winner of 12 Grammy’s. Starred in opera films directed by Zeffirelli, Rossi and De Bosio. Parallel to singing, he is an orchestra conductor with more than 600 performances. Since 2009 he interprets great baritone roles. His extraordinary artistic career continues uninterrupted for more than half a century and for this incredible milestone he has been celebrated in the Operas of New York, Vienna, Verona, Millan, and Buenos Aires.

Ainhoa Arteta one of world´s most renowned sopranos, she is characterized for soul-awakening performances. Her everlasting career is highlighted by collaborating with the most reputable maestros and being accompanied by renowned pianists. Her technical excellence and her incomparable passion for opera make her concerts as delicate as they are passionate. An unmistakable voice remarked by her Spanish DNA, her emotion, and her passion. The great Spanish artist has an extensive and successful musical career that has led her to perform on the world’s most prestigious stages such as the Metropolitan Opera at Carnegie Hall, Covent Garden, Bayerische Staatsoper and La Scala in Milan, among others. Her great successes are her stellar roles in “Cyrano de Bergerac” with Plácido Domingo, “La Bohème”, “Otello”, “Turandot”, “Carmen”, or “Don Carlo” and “Don Giovanni”, etc. In recent years she has received numerous awards such as the Metropolitan Opera National Council Auditions Award in New York City and the Concours International de Voix d’Opera Plácido Domingo in Paris.

Next Monday, July 11, the audience will have a new opportunity to enjoy two of the most important voices in the history of music on the stage of Starlite Catalana Occidente for what will be one of the most splendid nights of the summer.