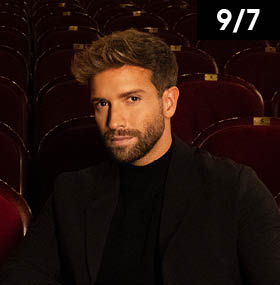 PABLO ALBORÁN, A TRIP THROUGH THE MOST EMOTIONAL UNIVERSE

Starlite Catalana Occidente will once again welcome the warm voice and emotive lyrics of one of the most important Spanish artists on the current scene, Pablo Alborán, who will perform on the 9th of JULY in the Festival Auditorium.

Since his beginnings in 2010, the singer-songwriter and musician from Malaga has garnered more than 30 awards, including multiple Latin Grammy nominations, two Golden Seagulls and two Silver Seagulls at the Viña del Mar Festival in Chile, Goya Award for best original song and 11 awards at Los40 Music Award, to name a few.

In this time, he has released 5 studio albums, two live albums, numerous singles, music videos and significant musical collaborations, all of which he has received the affection of the public, critics, and industry peers.

His lyrics, written and sung from the bottom of his soul, as well as his characteristic way of telling stories have led him to be recognized and admired both for his talent and sensitivity as well as for his charismatic personality.

Castillos de arena’ is the third single from his sixth studio album that will be released in 2022 and that Pablo Alborán will offer to his unconditional public next JULY 9TH at Starlite Catalana Occidente.