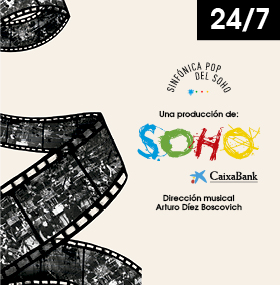 The concert ‘Notas de Cine’ of the Soho Pop Symphony is a special collaboration with Antonio Banderas in which the best soundtracks of the seventh art will be played in the Auditorium of Starlite Catalana Occidente, under the baton of the master Arturo Díez Boscovich and with musical collaborations such as the harmonicist player Antonio Serrano.

On Saturday, July 24, the quarry will be holding an authentic tribute to the most emblematic films in the history of cinema such as Blade Runner, E.T. the Extra-Terrestrial, Jaws and The Bridge on the River Kwai, among other great jewels of the film scene in a select repertoire based on masterpieces by John Williams, Max Steiner, Alan Menken, Vangelis or Nino Rota that will shine with their own light at the festival of the stars.

The Soho Pop Symphony proposes to the spectators of Starlite Catalana Occidente a magical and unforgettable musical journey through the history of cinema through a show artistically directed by Antonio Banderas himself and embodied by fifty first class musicians.

About the Soho Pop Symphony

The creation of the Soho Pop Symphony Orchestra is a project promoted by Antonio Banderas from the Soho Theater CaixaBank. In contrast to traditional classical symphony orchestras, the Soho Pop Symphony proposes the fun and enjoyment of making music with an eclectic and vibrant repertoire, which will range from classical works best known to the general public to Broadway music, film music, or The Beatles, among others.