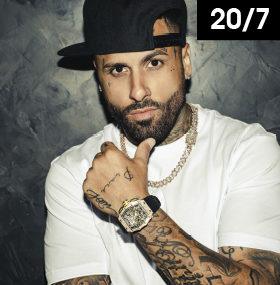 Starlite Catalana Occidente 2021 will welcome Nicky Jam, one of the most prestigious reggaeton singers within the Latin music scene, on Monday, July 19th and Tuesday, July 20th, in what will be his only concerts of the summer in our country.

Nicky Jam, who in 2015 totally consolidated his career with his great hit “El Perdón”, continues to position himself strongly in the genre, traveling the world with hits such as “Travesuras”, “X”, “Fan de Tus Fotos”, “Me voy pal party”, “Curiosidad”, “Juegos Prohibidos”, “El Party Me Llama” o “Tu Primera Vez”, all of them number one on charts.