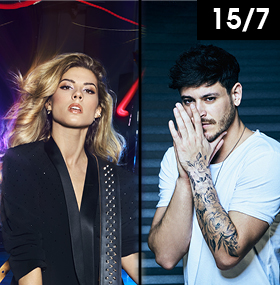 Miriam Rodríguez and Cepeda will be part of the Starlite Catalana Occidente lineup for the first time next Thursday, July 15th. Both artists will go on the stage of the boutique festival in which will be a magical night, where the audience will enjoy two shows full of talent, as both Cepeda and Miriam have become key figures in Spanish music scene.

Miriam Rodríguez’s new work is titled “La dirección de tu suerte”, composed and produced mostly by herself. The album went straight to #1 in sales and with it she has also conquered Latin American audiences. “Desperté” or “Dos extraños” are only some of the songs that we will be able to enjoy live on the Auditorium stage.

Cepeda will present us for the first time live his new album “Con Los Pies en El Suelo”, to witness new singles such as “Gentleman” or “Si Tú Existiera”. The young artist will also add on stage his entire band to prove all the energy contained in this new work, reflecting not only his reality, but also his generation’s, with adversity and longings.

The boutique festival will witness a magical night full of energy thanks to the voices of Miriam Rodríguez and Cepeda, with which they will make all the attendees enjoy an unforgettable evening.