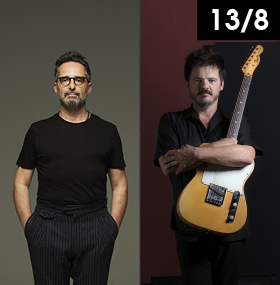 Starlite Catalana Occidente will receive for the first time in its Auditorium all the talent of two great geniuses: Jorge Drexler and Coque Malla, who will arrive with two concerts on Saturday, August 13.

Jorge Drexler is a Uruguayan singer and composer with a long professional career linked to music and the arts.

After more than four years of recording silence, this spring the Uruguayan presents his new album, “Tinta y tiempo”. This will be his fourteenth studio album, and comes months after the 30th anniversary of the release of his first album.

Three decades of songs that continue to add to the imaginary of the Uruguayan, who stands out especially for his tireless spirit of search and experimentation with music. His passion for prose and verse, the décimas and the word; in addition to his personal skill to express people’s emotions, which adds to his iron will to build bridges between different cultures and seek the nexus and empathy between all societies of the modern world.

Praised by critics and audiences for his connection with the audience in his concerts – performed all over the world – Drexler arrives in Marbella with a new and original show, accompanied by a renewed band on stage. In this tour to present the new album, in addition to being able to enjoy the newly released repertoire, we will surely be able to listen to songs from previous albums

Coque Malla, exemplary musician, actor and composer, is a reference for several generations. All his artistic adventures have an indisputable seal of quality, which has even led him to win a Goya for best song. The multifaceted artist from Madrid and his band are now returning to the big venues with his new tour “El Viaje del Astronauta Gigante” in which he will present the songs from his latest album. A review of his entire career, from his teenage debut with Los Ronaldos with songs like “No puedo vivir sin ti”, “Adiós papá” or “Por las noches”, through the major milestones of his solo career, the road traveled between “Soy un Astronauta Más” and “La hora de los gigantes” with big hits like “Me dejó marchar”, “Berlín” and “Un lazo rojo”, to his collaborations with other artists and unreleased songs like “Una sola vez”, his latest hit.  After three very intense years, this will also be a great opportunity to see Coque Malla live as he announces an indefinite break after the tour. A turning point in his thirty-five year career, in which the stage has always been his great passion.

On Saturday August 13 there is an unmissable date with the prodigies and masters of emotional expression, Jorge Drexler & Coque Malla, a magical night designed exclusively for Starlite Catalana Occidente, where these two great artists will give the baton to make us enjoy two unique shows.