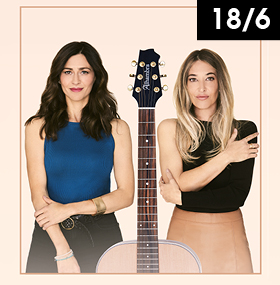 ELLA BAILA SOLA, THE MOST IMPORTANT SPANISH FEMALE POP FROM THE 90s

One of the most successful Spanish duos in history, Ella Baila Sola, formed by Marta and Marilia, will join the same stage. A very exclusive concert where they will remember great hits such as “Lo echamos a suertes”, “Amores de barra”, “Cuando los sapos bailen flamenco” or “Despídete”, among many others.

Their songs, full of meaning and offering a different style, sent them to the top of national and international charts, recognized with relevant awards as the Latin Grammy nomination as best band, Ondas Awards, 7 Platinum albums in Spain and Gold albums in Latin America.

Friday, 18th June, will be a very special night, when the iconic duo from the 90s Ella Baila Sola will meet again with its audience 25 years later at the Auditorium of Starlite Catalana Occidente.