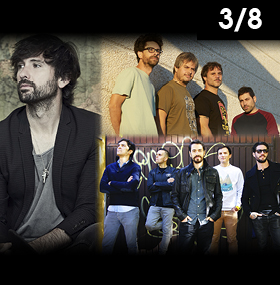 On Tuesday, August 3rd, Starlite Catalana Occidente will receive for the first time on the same stage the shows of David Otero, Despistaos & Jaula de Grillos.

Singer-songwriter David Otero will celebrate his 20-year career at the Auditorium Stage with his new work entitled “Otero y Yo”; an album where he captures the most emblematic songs of his entire career, from the beginning with the singing of the madman to the present day. David Otero will make us enjoy his great hits such as “Una Foto en Blanco y Negro” or “Buscando el Sol”, among others.

Despistaos has been proving for more than a decade that writing good lyrics and melodies and staying true to their style is the best way to work a respectable trajectory. Songs such as “Gracias” or “Física o química” have allowed them to forge a solid career, the group will present at the Boutique Festival their latest work “Estamos Enteros”, which has rejoined Despistaos after a few years of personal development and own projects.

Jaula de Grillos is a Madrid pop-rock group born in 2005. In 2007 they debuted with their first album entering top charts in their first week and taking on as a band nationally. 3 albums on the market, 1 live album and collaborations with artists such as Xabi San Martín (La Oreja de Van Gogh), are recognized by the public, industry and awards like MTV New Sound of Europe.

On Tuesday, August 3rd, it will be a unique opportunity to enjoy the voices of David Otero, Despistaos and Jaula de Grillos at Starlite Catalana Occidente 2021.