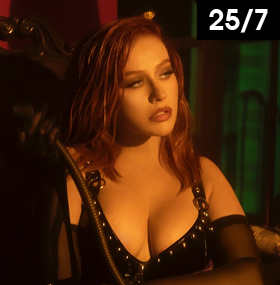 Christina Aguilera, the female pop star of the 90s, will perform for the first time at Starlite Catalana Occidente for the enjoyment of her fans on Monday, 25th JULY 2022.

The American singer and songwriter returns to the Spanish stage after almost 18 years without performing in Spain. And she does so with more desire than ever to explore her Latin roots.

The artist, who has sold more than 43 million records worldwide, will present her latest album, ‘La fuerza’, sung entirely in Spanish, to the Starlite Catalana Occidente audience to celebrate her power as a Latin woman.

Known for her powerful voice and hit songs, Aguilera has scored five No. 1s on the Billboard Hot 100 chart, making her only the fourth female artist to reach the top spot in three consecutive decades (’90s, ’00s and ’10s).

She has won six Grammy Awards, including a Latin Grammy, making her the first American to win the award, made possible by her Ecuadorian ancestry.

The charitable side of Christina Aguilera’s career is very present in her career, which has helped to raise more than 150 million dollars for the World Food Programme and other hunger relief agencies.

Starlite Catalana Occidente spectators will be able to enjoy one of the best concerts of the year, next Monday 25th JULY 2022.